How really is the Gandhipuram flyover helps reduce traffic congestion

Published by Saravanan Jayabalan on 12 November 2017 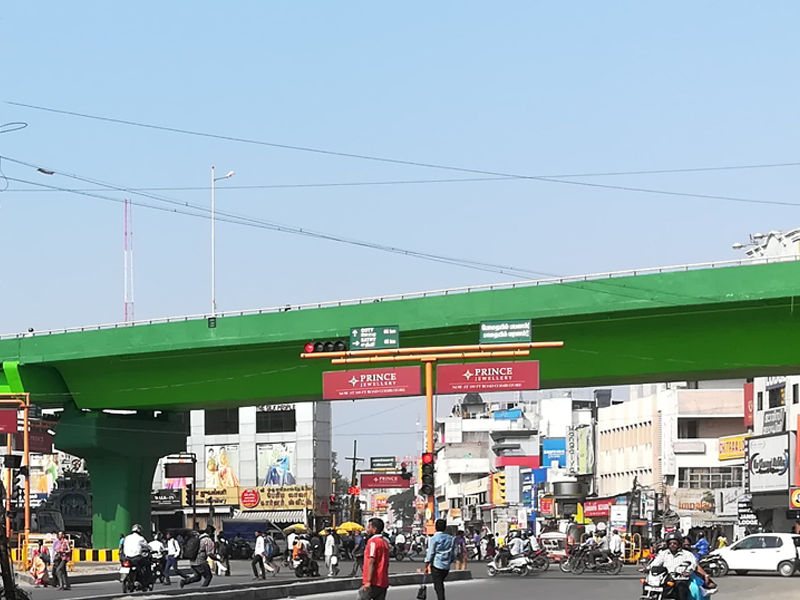 After a long wait, the much awaited Gandhipuram flyover was opened for traffic on 1st November, 2017. There has been speculations that the change in design would bring down the utilisation of the flyover. As it has been put into use for more than 10 days, I have made a small study on how the traffic pattern has been changed with the Gandhipuram flyover put into use and what percentage of traffic uses the flyover at a weekday peak-hour.

From this study, we can conclude on the following metrics:

The data used for the study is comparitively small and the results may not reflect the overall usage of the flyover.

For the study, a small sampling has been recorded on Friday (10th November 2017), considering it as a weekday peak-hour sample. All the data mentioned in the article were recorded between 9:00am to 9:30am. Vehicle movement has been recorded in Park Gate towards North and in Textool (Lakshmipuram stop) towards South. In both the directions the sample data is spread over two minutes each.

By number of vehicles

Overall, out of the total vehicles 36% took the flyover while the rest took service road.

By size of traffic

The traffic congestion can be directly dependent on the size of vehicular movement. For eg, one bus can make more congestion than a couple of two wheelers. So converting the number of vehicles to the size units as below.

The data results in the following table based on its size.

Overall, out of the total volume of vehicles 33% took the flyover while the rest took service road.

By number of people

Calculating the utilisation based on the number of people (by capacity of the vehicle) will throw light on what percentage of people got benefitted by the Gandhipuram flyover.

The data results in the following table based on passenger capacity.

Overall, out of the total passenger capacity 27% took the flyover while the rest took service road.


It is Cars, that are benefited the most

Among the type of vehicles, Cars followed by Two wheelers have migrated from the regular traffic to the flyover. By percentage Van and Mini-Truck have more, but by their total number they are negligible.


How faster is the flyover?

On a average two-wheeler drive, the vehicle driving on the flyover is almost 100% faster than the vehicle moving in the service lane traffic.


How to improve the utilisation of Gandhipuram flyover?

Though the analysis have been made only on the Level-1 of the flyover and having Level-2 under construction, there is no common traffic across the two levels so this study can be taken as a base for improvements. It is to be welcomed that the government is ready to hear suggestions from people to make modifications to the flyover, so that its utilisation can be improved much better.

Based on the above numbers, it looks like the flyover is much useful for people who come down south from Ganapathy towards Nanjappa Road as nearly 40-45% of vehicles use the flyover. But the utilisation has to be increased towards north.

A branch can be taken out from the Level-1 (left side while driving towards Ganapathy) to join the 100ft in the ground level towards west. This will help people travelling from Trichy Road, Avinashi Road and south of the city to join Mettupalayam Road. Also this will reduce traffic in cross-cut road signal. This arm can be adjacent to Level-2 flyover in order to avoid land constraint. 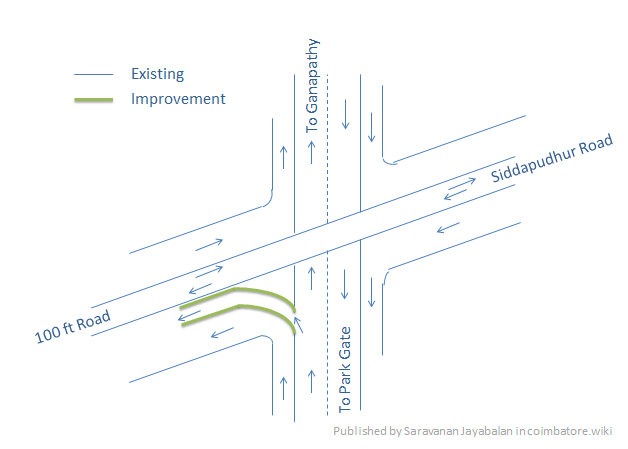 A branch can be taken out from the Level-1 (left side while driving towards Park Gate) to join the Bharathiyar in the ground level towards east. This will help people travelling from Sathy Road to join Avinashi Road. And there can be a U-turn in Level-1 that joins the traffic from Bharathiar road towards cross-cut signal. This will be helpful for people from Sathy road to reach cross-cut and North Coimbatore flyover. This modification is easy as both sides of Bharathiyar road near the junction belongs to the government. 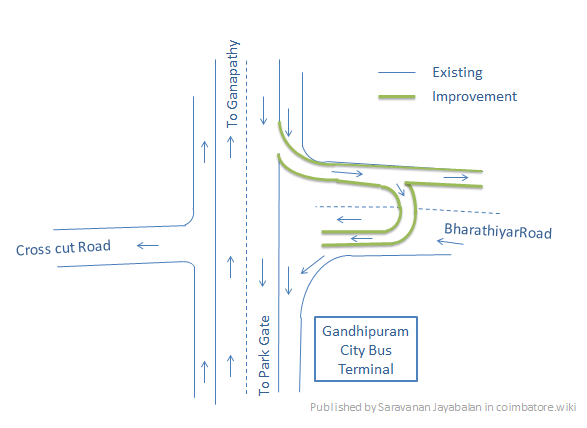 What? Yes, the service lane traffic can be eased by removing the inter-city busses. As there are plans to construct Integrated Bus Station in Vellalore, we have to keep our fingers crossed.

City busses moving in and out of the City bus terminal causes traffic congestion, dedicated lanes can be made (atleast from cross-cut signal to central bus stand) will make the traffic flow organised.

Improvement #5: A (sub)way for pedestrian crossing

Hundreds of passengers cross the Nanjappa road between the flyover every minute. More than improving traffic, safety of these pedestrian comes to the top priority. A subway or a pedestrian overpass with escalator facilities is a must and top priority item.

Though the flyover conversion rate is lower in the Park Gate site, it can be improved by above suggested methods. The entry point to the service lane near Park gate should be widened as it is too narrow considering the ratio of vehicles it carries.

The utilisation of the Gandhipuram flyover by the traffic from Sathy road is impressive. Apart from the regular traffic the flyover has brought in new traffic who were previously using Avarampalayam road to reach Avinashi road and then to Trichy road. This also reduces traffic a little in the Avarampalayam road, Ramakrishna Hospital junction section.

Apart from this blog post, I am planning to take this study along with the improvements (even if you have some) to the concerned authorities.

Kindly post your feedback as comments, even if you have any idea to make modification to the flyover and improve the traffic pattern please post them.

I wish to welcome suggestions / ideas on what can be included in this website to make this more useful to people and also to make this site a one-stop portal for all information regarding Coimbatore. You can mail your suggestions to contact@way2cbe.com